The Alaska Coast Guard has said that a salvage tug has reached the Cougar Ace, a disabled ship adrift 127 miles south of the Aleutian Islands. 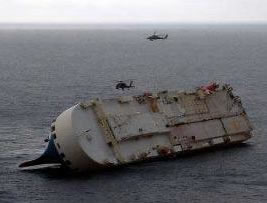 The ship is now drifting at between 1 and 2 knots in an easterly direction. It had been drifting in a more northerly direction toward the Aleutians.

Another tug out of Dutch Harbor was expected to reach the ship Monday, and a third out of Seattle was to arrive Wednesday.

The 378-foot Coast Guard cutter Morgenthau is on scene monitoring the Cougar Ace for signs of pollution and tracking its movement.

Once the Makushin Bay is on scene the various salvage experts will assess the condition of the vessel and report salvage options to the Unified Command for action. Those reports will provide for accurate plans to right the vessel and safely tow it. Additional salvage equipment is being staged in Dutch Harbor.

Weather conditions on scene are reported as 12 knot winds from the southwest. Sea state is one foot seas with three foot swells. Conditions are overcast with intermittent rain and dense fog.

Coast Guard Video of sailors hoisted to helicopter from Cougar Ace
AlaskaReport.com is a privately owned Alaska news, weather, and information website based in Anchorage, Alaska.

All images, media, and content copyright © 1999 – 2018 AlaskaReport.com – Unless otherwise noted – All rights reserved