A new study by the Canadian Department of Fisheries and Oceans suggests farmed Atlantic salmon and Pacific salmon can coexist on the Pacific coast. The study, authored by scientists Richard Beamish and Simon Jones, claims juvenile pink salmon that entered the eastern margin of the Queen Charlotte Strait in 2003 and returned as adults the following year had a high survival rate, despite 16 Atlantic salmon farms operating in the area. 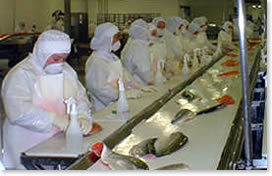 But some biologists and conservationists say so many young salmon survived because four farms were emptied or fallowed in 2003, reducing the amount of sea lice and viruses that would have infected them.

However, Beamish said Wednesday that's based on an assumption that the juvenile fish are taking a specific migration route.

"There is no published information identifying a migration route so it's only speculation."

Beamish said the juvenile salmon could also have survived because of increased food production based on the climate and other ocean conditions.

Beamish and Jones work as scientists with the Department of Fisheries, as well as holding several other research positions.

Farmed Atlantic salmon is British Columbia's largest agricultural export but the issue is a contentious one because conservationists say farmed fish infect wild species with sea lice, threatening their population.

The controversy led the B.C. government to close some fish farms in the study area from March to June 2003.

Biologist Alexandra Morton, who reviewed the study that's published in the ICES Journal of Marine Science, said the emptying of four fish farms skews results because it's not a typical scenario.

"The report is trying to pretend that salmon farming can occur and wild fish are not affected but when you read the fine print, what it really says is that if you manage to separate the farmed salmon from the young, wild salmon then everything is OK."

Morton said other biologists and some First Nations groups want the study to be repeated with all the fish farms open.

Clare Backman, a marine biologist at a fish farm called Marine Harvest Canada, said the number of farmed salmon remained the same in 2003 when the four farms were closed.

He also said Morton and others are basing their arguments for clear passageways for juvenile salmon based on work done in Europe.

But there's a huge difference between the two jurisdictions because British Columbia has millions of fish compared to several hundred in Europe, Backman said.

He also said the effect of sea lice on outmigrating fish as a major cause of death among juvenile fish is merely speculation.

But Jennifer Lash, executive director of the Living Oceans Society, said at least seven peer-reviewed scientific papers have been published on the fact that sea lice kill wild salmon.

"So for Marine Harvest to say that it's speculation is absolutely incorrect."

Lash echoed Morton's concerns that the only way to protect wild salmon is to keep farmed salmon in closed containers that won't allow them to escape and infect wild species.

Backman said there's a continuing appetite around the world for farmed salmon, especially in the United States and Asia.