NOAA Fisheries scientists have chosen Aleut words to officially name four fish species they found in the Aleutian Islands that were new to science. A snailfish, allocareproctus_unangas, newly described and documented by NOAA scientists, has been officially named in honor of the people of the Aleutian Islands. 'Unangas' is a word for the Aleuts of Atka Island, a major island near the center of the new species' known range. 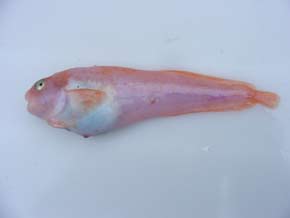 Scientists Dr. James Orr, Duane Stevenson, and Morgan Busby of NOAA's Alaska Fisheries Science Center collaborated with Aleut language teacher Moses Dirks from the Unalaska School District and with NOAA Fisheries anthropologist Jennifer Sepez on naming the species. Dirks, a native speaker and linguist, worked with local elders to see if there were already any Aleut names for this kind of fish, then helped suggest names or offer translations of descriptive terms suggested by NOAA's scientists.

"Moses Dirks has worked tirelessly to preserve, document, and teach Unangam Tunuu," said Dr. Sepez. "We were honored to work with him." Unangam Tunuu is the Aleut name for the Aleut language.

Dr. Orr, one of the ichthyologists involved, said, "We used these names to recognize the people who were here before we scientists arrived. We hoped to honor the Aleut culture, in a small way, by preserving these words within the scientific names."

Three of the newly named species are snailfishes (genus Allocareproctus), smooth and shiny with no scales, in colors from peach to pink to red and ranging in size from about three to seven inches long. Scientists found them in waters of the Aleutian Islands between 250 and 2,130 feet down.

A fourth newly named fish species-an eelpout (genus Lycodes)–also appears scale–less but has very small scales and looks more like an eel. It is closer to a foot long. NOAA researchers conducting annual scientific bottom trawl surveys in the central Aleutian Islands found the new type of eelpout. Two specimens had remnants of sea urchins in their stomachs.

The native people of the Aleutian Islands have extensive knowledge and understanding of the marine environment. Fish and marine mammals feed their populations, animate their stories, and sustain their culture. But the newly discovered species are all relatively small fish from very deep water – not the usual fishing target of an Alaska Native fisherman. Orr, on the other hand, has spent the last ten years examining marine life from the Aleutian depths.

The namers titled one of the fish-whose complete name is 'Allocareproctus tanix'--using the Aleut word for forehead, 'tanix', referring to the fact that is has no whiskers on its smooth, pale 'forehead', unlike the other species which have many whiskers on their heads.

'Allocareproctus ungak' uses the Alutiiq word for whiskers, 'ungak' in reference to the whisker-like papillae on the fish's head.

'Allocareproctus unangas' was named in honor of the people of the Aleutian Islands. 'Unangas' is a word for the Aleuts of Atka Island, a major island near the center of the known distribution of the newly named species.

Scientists found specimens of the new eelpout species between Samalga Pass and Seguam Pass on different expeditions from 1994 through 2004, and again this summer. They named the species 'Lycodes akuugun'. The word 'akuugun' is the Aleut name for the native inhabitants of the Islands of Four Mountains, the region in which the species was discovered.

"Every two to three years we survey the Aleutian Islands to provide fisheries and ecosystem data to manage the marine resources," explained Orr. "Finding four new species in Alaskan waters indicates just how much we have yet to learn about our marine environment. And we know of several new species still to be named." At least one of these undescribed species is a snailfish from a different genus that will also bear an Aleut species name.

The species of snailfishes turned out to be quite common throughout the Aleutians, but because the genus had been known from only a handful of specimens from the western Pacific off Japan and the Kuril Islands, what was thought to be the single member of the genus and these new species had been overlooked.

"We were sailing at different times on four chartered fishing vessels out of Dutch Harbor when we found Lycodes akuugun specimens", said Orr–"the Dominator, the Vesteraalen, the Gladiator and the Sea Storm. Thanks to the efforts of other scientists aboard the vessels, as well, the specimens were returned to our laboratory where Duane [Stevenson] and I were able to recognize them as representing a previously unknown species."