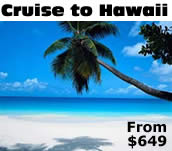 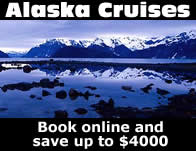 The Coast Guard is monitoring what appears to be an abandoned coal barge approximately 200-feet in length located nearly 60 miles southeast of the Kenai Peninsula. 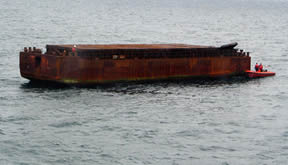 It was initially spotted in May, drifting 250 miles south of the Aleutian chain. There are no markings on the barge to indicate a port or country of origin. The only markings on the barge are "CTP 424," located approximately 20-feet aft on the port and starboard sides, and a Russian class society load line along the waterline. The barge is not listed in any available data bases. A boarding party from the Coast Guard Cutter Maple reported finding Russian labeling on parts of the barge when they boarded it recently. Crews from the Maple place a twice-daily position indicating radio beacon on board, as well as a 155mm buoy lantern (quick flash light) on the bow, raised to be seen from all angles.

There is no immediate danger from the drifting barge. The Coast Guard is broadcasting a notice to mariners concerning its location.

The barge is currently in the Sector Anchorage area of responsibility. They are contacting all environmental partners, seeking to identify possible trajectories and landfall, as well as developing a salvage and destruction plan if needed.