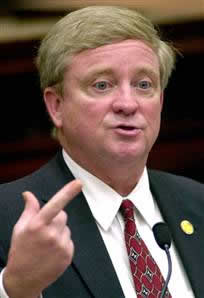 The Ohio Republican faces up to 10 years in prison for taking money, gifts and favors in return for official actions on behalf of Jack Abramoff and his clients.

Ney confessed before U.S. District Judge Ellen Huvelle. "I plead guilty your honor" was his statement to the judge.

In a statement distributed to reporters after the court session, Ney said, "I accept responsibility for my actions and I am prepared to face the consequences of what I have done."

Ney is the latest in a string of once-influential men convicted in a scandal that so far has caught several lobbyists and two members of the Bush administration.

House Republicans gave Ney a standing ovation after he told them May 10th that he had no plans to resign and would vigorously fend off a likely federal indictment.

Website by LiquidAlaska
AlaskaReport.com is a privately owned Alaska news, weather and commercial fishing website based in Juneau.

All images, media, and content copyright © 1999 – 2006 AlaskaReport.com/LiquidAlaska – Unless otherwise noted – All rights reserved