The United States has evidence of radioactivity from a site where North Korea was suspected of conducting a nuclear weapons test, a U.S. official said Friday. 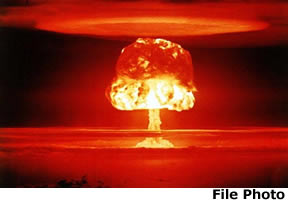 The official said the evidence is preliminary, but if it is confirmed, the United States will be in a position to confirm North Korea's claim on Monday that it successfully set off a nuclear blast for the first time.

The report appeared to contradict a CNN report earlier Friday from two U.S. government officials with access to classified information that an initial air sampling over North Korea showed no indication of radioactive debris.

If confirmed, the nuclear weapons test would be the first of its kind since Pakistan's in 1998.

The U.S. Air Force flew a WC-135 Constant Phoenix on Tuesday to collect air samples from the region.

The intelligence community and the military will continue to fly satellites and collect air samples in the region to try to collect radiological data that would provide confirmation of a nuclear test, officials said. But as time goes on, it will be increasingly difficult to achieve confirmation.

Officials emphasize the data collected are preliminary and provide no conclusive evidence about the North Korean event.

It is possible there was no radiological data. That could be the case if: the North Koreans successfully sealed the site; it was such a small detonation and so deep underground there was no escape of nuclear debris; or the test was actually conventional explosives.

Arms control monitors in Vienna, Austria, also tell CNN that they are now trying to run computer models to simulate wind conditions over the Korean Peninsula so they can try to calculate where radiological material might flow on air currents so they can position sensors for the best position to pick it up.

Government experts continue to emphasize they will continue to sample from air, ground and maritime sensors.

The U.N. Security Council has agreed to vote Saturday on whether to impose sanctions on North Korea over its purported nuclear test, according to John Bolton, the U.S. ambassador to the United Nations.
Credit: CNN - Jamie McIntyre

Website by LiquidAlaska
AlaskaReport.com is a privately owned Alaska news, weather and commercial fishing website based in Juneau.

All images, media, and content copyright © 1999 – 2006 AlaskaReport.com/LiquidAlaska – Unless otherwise noted – All rights reserved